About The Cook and Barker Inn

‘A real traditional Northumbrian Country Inn’ is the perfect description for The Cook & Barker Inn. From its elevated location in the picturesque village of Newton on the Moor, the Inn enjoys outstanding views of both the Northumberland Coast and the Cheviot hills. Situated close to the main A1 dual carriageway, some 35 minutes from Newcastle and Berwick, you will find that as we are well positioned for Newcastle Airport and North Shields Quay,

Cook and Barker Inn – Then and Now – Old Image Taken from Above the Open Fire.

The Cook and Barker makes the perfect staging post for those visitors with European or international destinations in mind. Alternatively, we are ideally placed for the business person travelling to the Scottish Capital and Border towns and for the tourist exploring the heart of rural Northumberland.

Stunning foodOur clientele come to wine, dine and stay at the Cook & Barker for the best of reasons: the combination of excellent cuisine, a delightfully traditional warm and welcoming atmosphere, well-equipped and comfortable rooms, the professional and agreeable service and the relaxed and friendly ambience. Click here to view the Inn Galleries

How the Inn Got its Name. 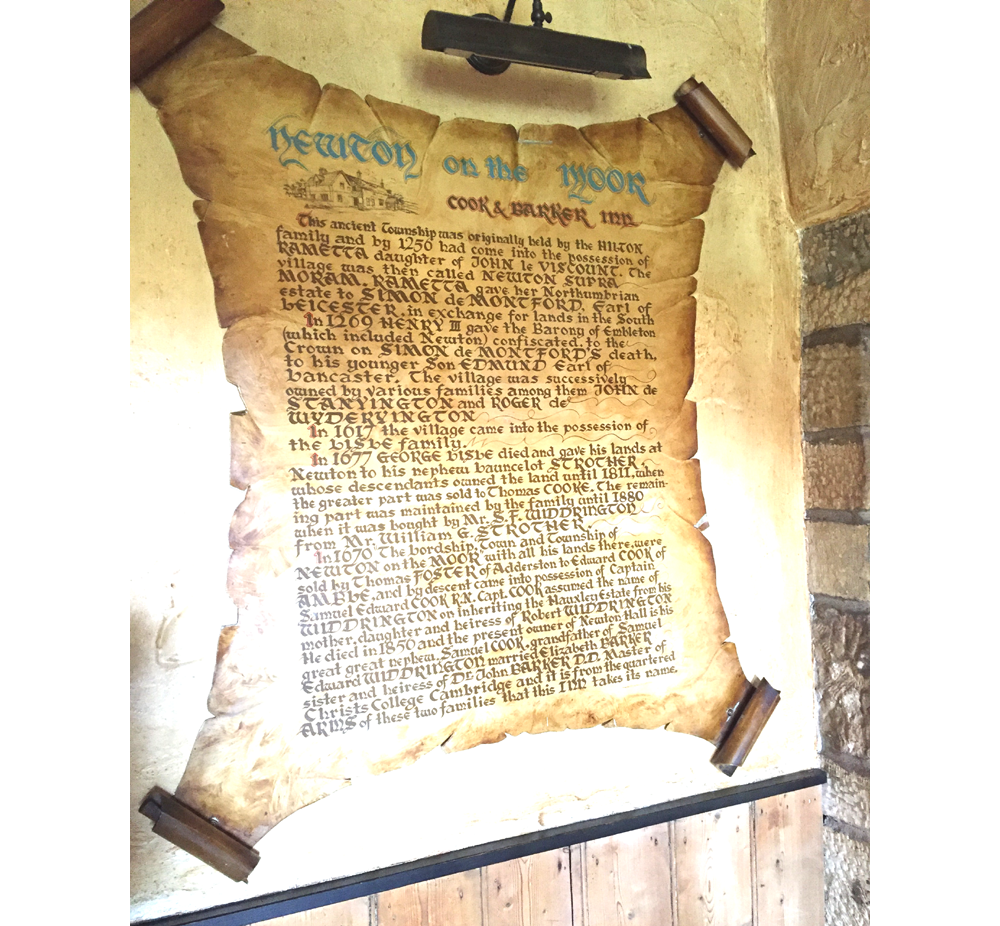 How the Inn got its Name Parchment, Hanging in the Bar Area of the Inn

Transcribed from the document above

Newton on the Moor. This ancient township was originally held by the Hilton family and by 1250 had come into the possession of Rametta daughter of John le Viscount, The village was the called Newton Supra Moram. Rametta gave her Northumberland estate to Simon de Montford, Earl of Leicester, in exchange for lands in the South.

In 1269 Henry III gave the Barony of Embleton (which included Newton) confiscated, to the Crown, on Simon de Montfords death, to his younger son Edmund Earl of Lanchester. The village was successively owned by various families among them John de Stanyington and Roger de Wyderyington.

In 1617 George Lisle died and gave his lands at Newton to his nephew Lancelot Strother whose descendants owned the land untill 1811, when the greater part was sold to Thomas Cooke. The remaining part was maintained by the family until 1880 when it was bought by Mr S F Widdrington from Mr William G Strother.

In 1670 the Lordship, Town and Township of Newton on the Moor with all his lands there, were sold by Thomas Foster of Adderston to Edward Cook of Amble, and by descent came into possession of Captain Samuel Edward Cook R.N. Capt Cook assumed the name of Widdrington on inheriting the Hauxley estate from his mother, daughter and heiress of Robert Widdrington. He died in 1850 and the present owner of Newton Hall is his great great nephew. Samuel Cook, grandfather of Samuel Edward Widdrington married Elizabeth Barker sister and heiress of Dr John Barker D.D. Master of Christs College Cambridge and IT IS FROM THE QUARTERED ARMS OF THESE TWO FAMILIES THAT THE INN TAKES ITS NAME.