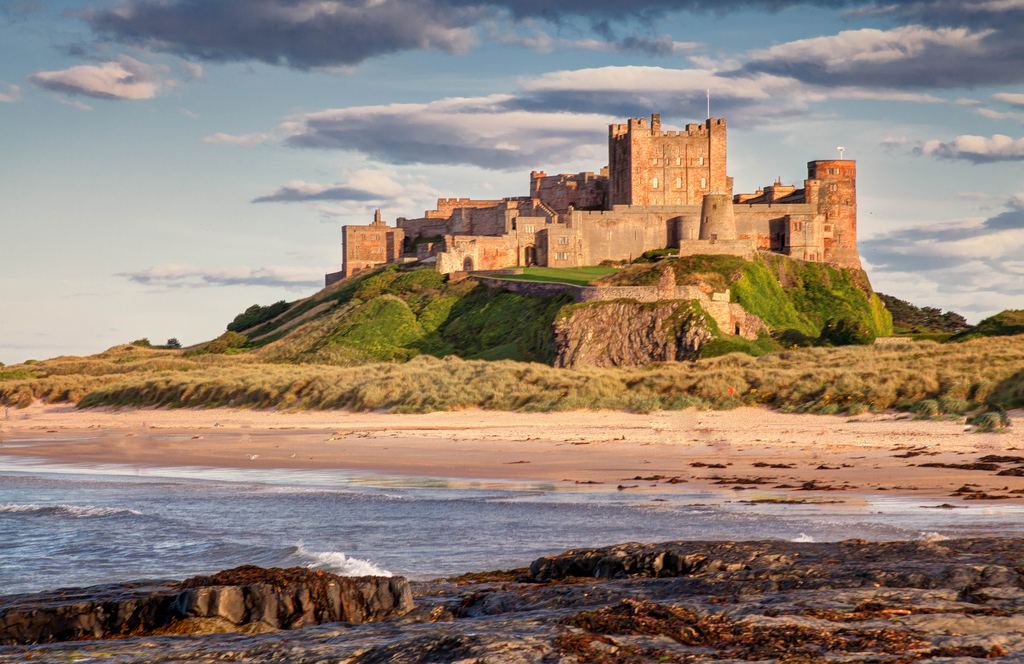 .
Bamburgh Village – is a stunningly attractive small Village set on the Northern stretch of the Northumberland Coast. It is without doubt dominated by its magnificently striking Castle that can be seen for miles around, giving the whole Village a somewhat dramatic feeling. You can’t fail to be impressed by the sheer scale of the Castle once you are up close and in the Village itself. There is much to do in the Village alongside the Castle and it’s amazing history, there are impressive stretches of pure golden sandy beaches, many ‘proper’ English tea rooms and restaurants, St Aidan’s Church and a newly renovated museum dedicated to Grace Darling, amongst other things

Spanning nine acres of land on its rocky plateau high above the Northumberland coastline Bamburgh is one of the largest inhabited castles in the country.
Explore the castle and discover more about this iconic building by clicking the different areas with your mouse. The great fortification of Bamburgh Castle sits on an outcrop of volcanic dolerite. Known locally as whinstone for the sound it makes when hit by a stonemasons hammer, it provides a natural throne upon which the castle sits forty five metres above sea level. 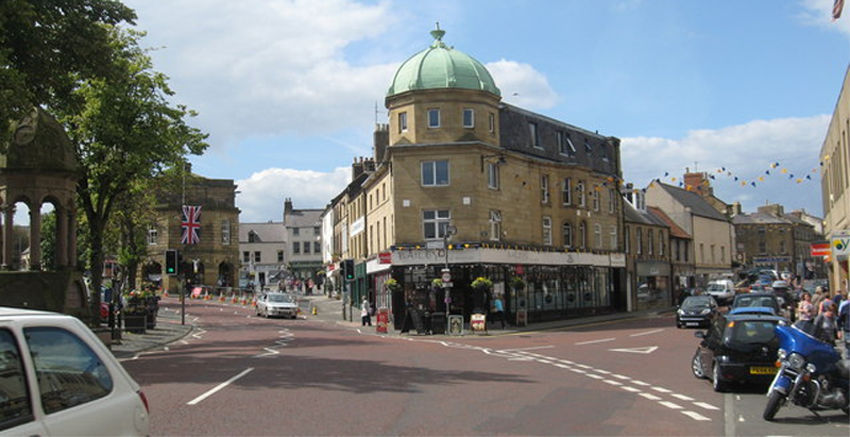 Alnwick’s main shopping area is the located in the town centre. It is split into three main streets, Bondgate Within, Market Street and Fenkle Street. Together they form a triangular circuit around the Marketplace.

Bondgate Within has recently had the honour of being voted Britain’s best street for shopping in the 2011 Google Street View Awards, beating off stiff competition from all over the Country. It was the excellent selection of shops, from mainstream shopping chains to independent crafts and gifts, butchers, bakers and deli’s, that gave Bondgate Within the edge. Having a beautiful Market Town setting and a 15th Century Tower at it’s entrance can’t have hurt either, giving a true sense of the perfect Town High Street. I have tried to highlight the most interesting and noteworthy of these shops below.

Bondgate Within runs from the Bondgate Tower as you enter the town along to the right of the Marketplace until the road narrows, where it turns in to the imaginatively titled Narrowgate. Shops on Bondgate Within include: 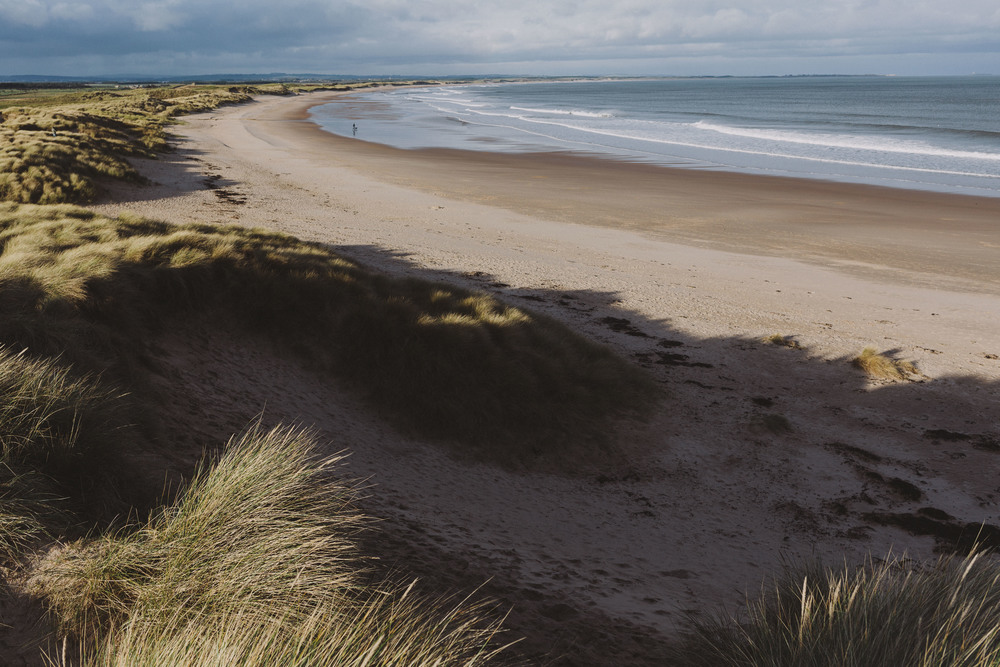 Druridge Bay on the Northumberland Coast is a beautiful living landscape, with miles of golden sandy beaches and a haven for wildlife. The bay is a stunning seven mile stretch of sand running from Amble to Cresswell and is a popular place for outdoor activities including cycling, walking, paddling and surfing. This beach has a fascinating and varied past, in the 1800’s coal was mined nearby and during World War II Druridge Bay was thought to be a possible landing place for a German invasion.

You can still see evidence of the anti-tank concrete blocks that were constructed to defend our shores right through our coastline. Within Druridge Bay Country Park there are a number of smaller nature reserves with wildlife ranging from swans around the reservoir to the rare golden snipe. This makes it an excellent spot for ornithologists or just the casual bird spotter.

Getting There
The easiest way to visit Druridge Bay is to visit by car. There is a large car park close to the visitor centre and from here is it just a short walk to the beach. The 518 bus service between Morpeth and Alnwick stops at Hadston, but there is a 10 minute walk to Druridge Bay Country Park from Hadston Village.

Postcode for your SatNav: NE61 5BX.

Warkworth is a beautiful, quaint old Northumbrian Village almost completely surrounded by a loop in the River Coquet, about a mile from the coast. At one end of the Village sat atop the hill is the stunning ruin of Warkworth Castle (an English Heritage site) and at the other sits the parish Village church of St Lawrence. The Village itself has thankfully been left almost untouched by modern life and tourism, it’s easy to picture what life would have been like here in the past. In between the Castle and the Church are many Inns, upmarket shops and galleries, gift shops and tea rooms.

The magnificent cross-shaped keep of Warkworth, crowning a hilltop rising steeply above the River Coquet, dominates one of the largest, strongest and most impressive fortresses in Northumberland.

The castle’s most famous owners were the Percy family, whose lion badge can be seen carved on many parts of their stronghold. Wielding almost kingly power in the north, their influence reached its apogee under the first Earl of Northumberland and his son ‘Harry Hotspur’, hero of many Border ballads as the bane of Scots raiders and a dominant character in Shakespeare’s ‘Henry IV’.

Having helped to depose Richard II, these turbulent ‘kingmakers’ both fell victim to Henry IV: the next three Percy Earls likewise died violent deaths. Still roofed and almost complete, the uniquely-planned keep dates mainly from the end of the 14th century.

It presides over the extensive remains of a great hall, chapel, fine gatehouse and a virtually intact circuit of towered walls.

Half a mile from the castle, tucked away by the Coquet and accessibly only by boat, stands a much more peaceful building: the late medieval cave Hermitage and chapel of a solitary holy man.

Getting There
By far the easiest way to visit Warkworth is by car. There is a public car park in the little square off Bridge Street in front of the church. This does tend to be very busy all year round, fortunately there is further parking by the river. Head past the church and around to the left and you will find further parking in a beautiful riverside setting. Perfect to feed the ducks or have a picnic. Arriva buses do run through the Village, they have a route that connects Amble and Alnwick that has stops on Bridge Street and Castle Street. The nearest train station to Warkworth is approximately four miles North, just outside the Village of Alnmouth.

Hope House Farm, Amble is located approximately 8 miles from the Cook and Barker Inn. Phil took over the farm in 2007 with the aim of providing produce for the Cook and Barker which it now does. Texel lamb and award winning pedigree Aberdeen Angus cattle now feature regularly on our menus.

Lamb Produce – Contact the Cook and Barker to place an order for lamb.

The stables are now under new management. For more information please contact the Stable Manager Enid Grant on 07896978155 or alternatively, Hope Farm Manager Gavin Baston on 07446129851

Or alternatively, please contact Phil Farmer at the Cook and Barker