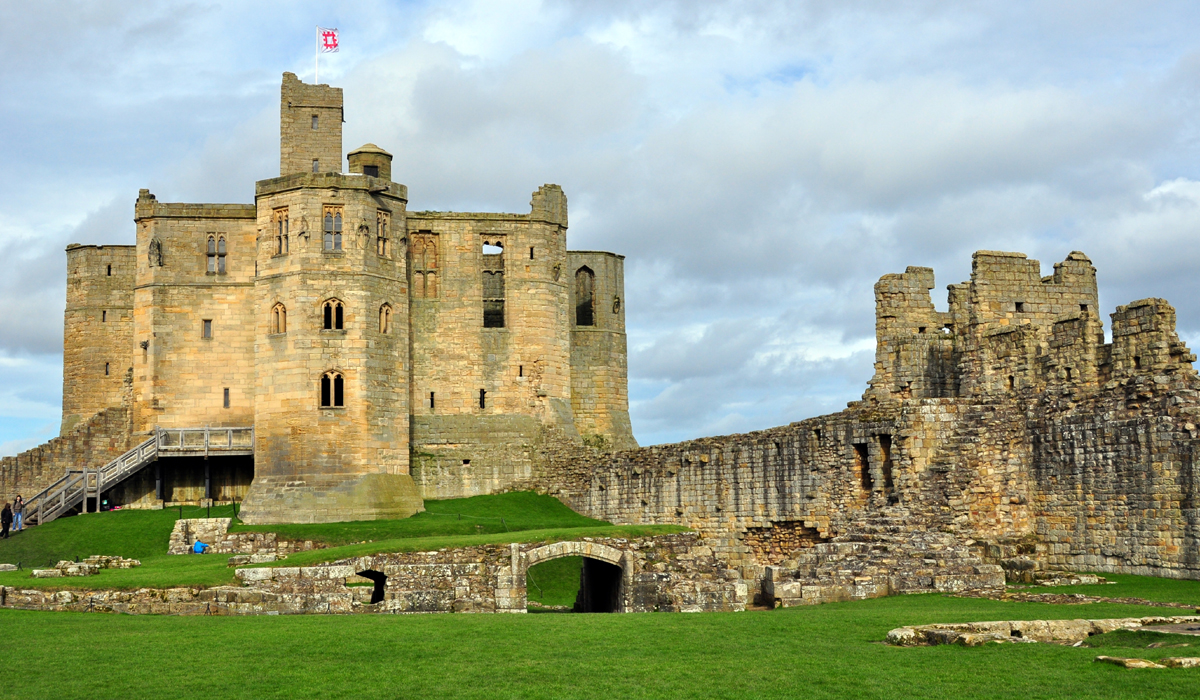 Warkworth is a beautiful, quaint old Northumbrian Village almost completely surrounded by a loop in the River Coquet, about a mile from the coast. At one end of the Village sat atop the hill is the stunning ruin of Warkworth Castle (an English Heritage site) and at the other sits the parish Village church of St Lawrence. The Village itself has thankfully been left almost untouched by modern life and tourism, it’s easy to picture what life would have been like here in the past. In between the Castle and the Church are many Inns, upmarket shops and galleries, gift shops and tea rooms.

The magnificent cross-shaped keep of Warkworth, crowning a hilltop rising steeply above the River Coquet, dominates one of the largest, strongest and most impressive fortresses in Northumberland.

The castle’s most famous owners were the Percy family, whose lion badge can be seen carved on many parts of their stronghold. Wielding almost kingly power in the north, their influence reached its apogee under the first Earl of Northumberland and his son ‘Harry Hotspur’, hero of many Border ballads as the bane of Scots raiders and a dominant character in Shakespeare’s ‘Henry IV’.

Having helped to depose Richard II, these turbulent ‘kingmakers’ both fell victim to Henry IV: the next three Percy Earls likewise died violent deaths. Still roofed and almost complete, the uniquely-planned keep dates mainly from the end of the 14th century.

It presides over the extensive remains of a great hall, chapel, fine gatehouse and a virtually intact circuit of towered walls.

Half a mile from the castle, tucked away by the Coquet and accessibly only by boat, stands a much more peaceful building: the late medieval cave Hermitage and chapel of a solitary holy man.

Getting There
By far the easiest way to visit Warkworth is by car. There is a public car park in the little square off Bridge Street in front of the church. This does tend to be very busy all year round, fortunately there is further parking by the river. Head past the church and around to the left and you will find further parking in a beautiful riverside setting. Perfect to feed the ducks or have a picnic. Arriva buses do run through the Village, they have a route that connects Amble and Alnwick that has stops on Bridge Street and Castle Street. The nearest train station to Warkworth is approximately four miles North, just outside the Village of Alnmouth.